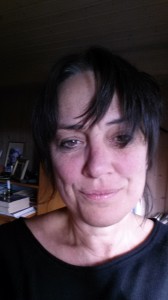 I’d like to talk with you about your work Site Monokrom which has been fascinating me since I’ve seen it the first time. While being a painting based on oil, its non-figurative, non-painterly emphasis on materiality suggests a sculptor’s approach, focusing on the object character of the work. What motivated you to make this work that oscillates between painting and sculpture? What kind of investigation were you after?

Site Monokrom is an investigation of something genuine that is at same time present. Material and technique are closely implemented in the process of developing the expression. This relationship is part of an investigating process: the spatial action, the handling of the rakes and the material, raking the fine lines until the point of their dissolution, modulating scales and direction. It is the saving of the immaterial between the striations that gives the work its spatial communication.

The monochromatic graphical richness takes advantage from the condition of the eye. I investigated the richness of structuring the grey color, searching for a grey point zero. The oscillation occurs in the modulation of layers establishing a physical microspace where the monochromatic meets with the site, where the expression establishes a communication of graphical expression.

The oscillation between painting and sculpture can better be understood within the discourse on sculpture. Willy Ørskov, a Danish sculptor of the 20th century, suggested that there is a difference between the notions of sameness and identity. He understood sameness as a given property which mainly gives meaning to the figurative, while by contrast he framed identity as an activity; that is, identification. Identification is useful within scientific investigation and is an alternative categorization of the object, including identical objects, but also identical conditions, identical change, identical scale, etc.

Furthermore, Site Monokrom suggests in its title yet another type of reference – a kind of territorial space. The canvas seems to be an abstract landscape, a geological formation. Instead of operating within the figure/ ground polarity, the work seems to be based on the modulation of ground solely. Its title suggests an affinity with ideas from the land art of the 1960’s, albeit within the framework of painting. Would you agree?

Yes, I agree. The territorial directionality of the work is connected to navigational skills; it mediates a spatial orientation. The expressive character of the work relates to transitions in nature/ culture, and the significance of contextualizing this transition into visual language. We navigate by conscious and unconscious registrations of light with shadow; we navigate by traces of handling and movement. My ambition has been to question the silent awakening of something that is part of our collective consciousness. To register tiny variations that are vibrating into space, in endless continuity, with ongoing introspection. 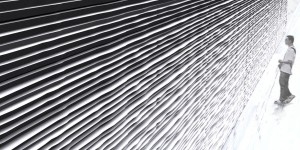